These release notes provide information on the new features, enhancements, resolved escalations, and bug fixes completed in each release for the Announcement card.

Click for Table of Contents
Important
For each release, the updates are pushed to the card template in the Library. Cards created prior to the latest release will not receive the latest updates. To get the latest feature or bug fix for this card, the card must be recreated with the latest template.

The following UI improvements have been made to the Announcement card:

The following UI improvements have been made to the card theme:

Support for 2.0 compatibility allows Announcement 2.0 card themes with custom data structures to be imported and used with the latest Announcement 3.0 card.

The following updates have been made to the card theme:

With the introduction of Content Categories in Appspace 8.0 ac.22, all card themes will be assigned with a default content category, allowing organizations to create content, build channels, and target messaging according to workplace communications best practices and internal communication goals.

Users will also be able to view the Content Category for every piece of content within a channel playlist. However, cards created prior to this release will not contain a content category and will be considered as “Unassigned”.

The Announcement card version. 3.0 is coded using the Angular 8 framework, which provides better architecture, structure, and security to match our newest card templates.

Below is a list of improvements and enhancements that are available in this version:

New Transitions for Text and Layout

Below is the list of transitions that will be available:

The Announcement card content creation workflow and card editing user interface has been updated and streamlined in conjunction with the release of the completely redesigned Library module in Appspace 8.0.

The card editor has been updated with a new UI and workflow, which groups key functions and features into tabs and sections for improved user experience, such as:

When creating a card, you now have the option to filter results based on tags and card template categories which are based on card types such as Messaging, Data, Services, Feeds, and Legacy content – to easily find what you need from a huge list of templates available.

The configuration of the feature media positions with circle masking has been improved, by displaying the image while taking into account the aspect ratio and margins set in the card editor.

The configuration of the feature media positions has been improved, by displaying the image while taking into account the aspect ratio and margins set in the card editor.

The Announcement card has been updated to include the following enhancements and features: 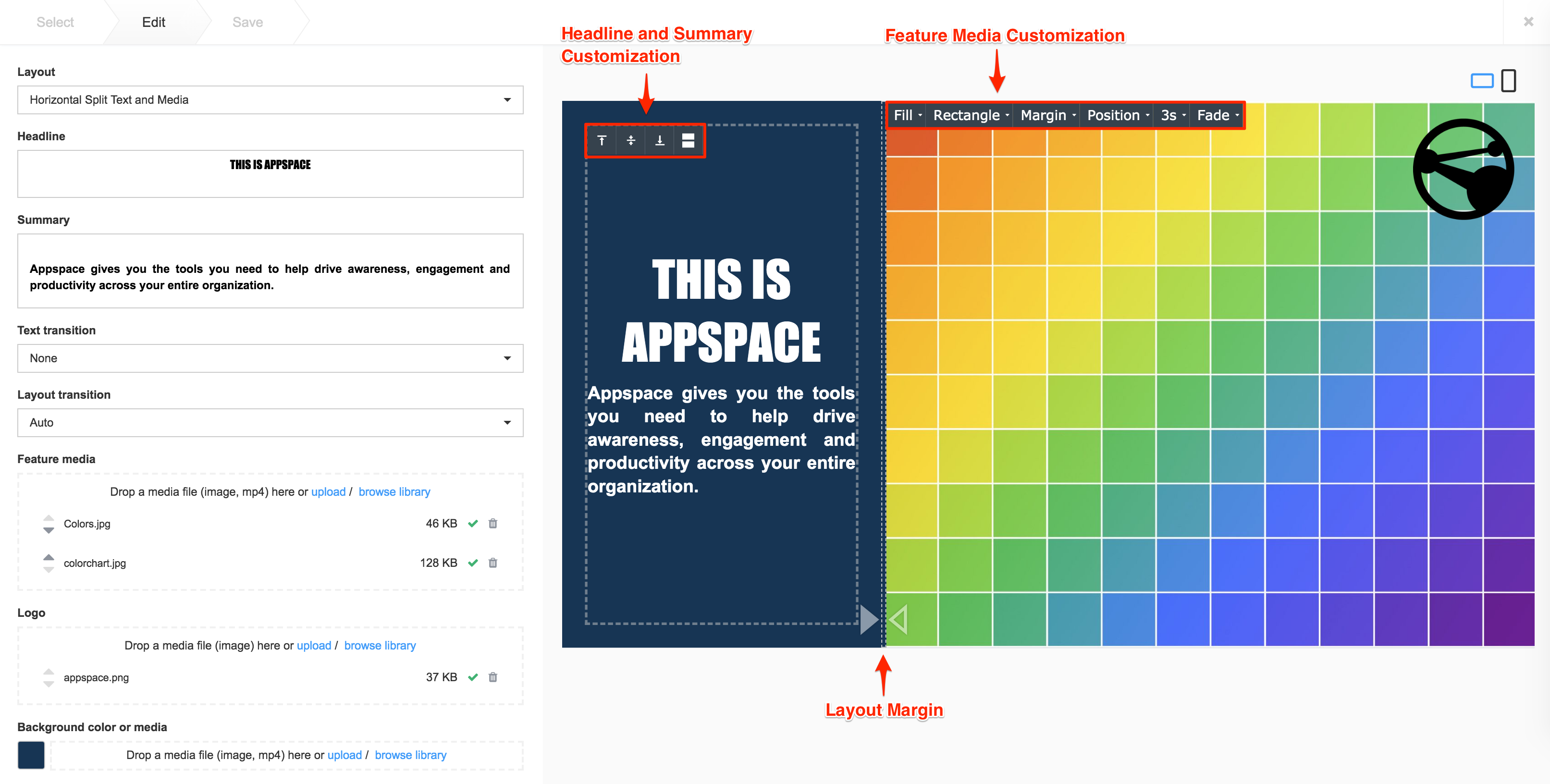 An enhanced Announcement card with animations that include the following features:

Existing Appspace Announcement card templates (prior to this release) will be disabled by default. Administrators may enable it if needed. However, user created themes will still remain in the Library.

Was this article helpful?